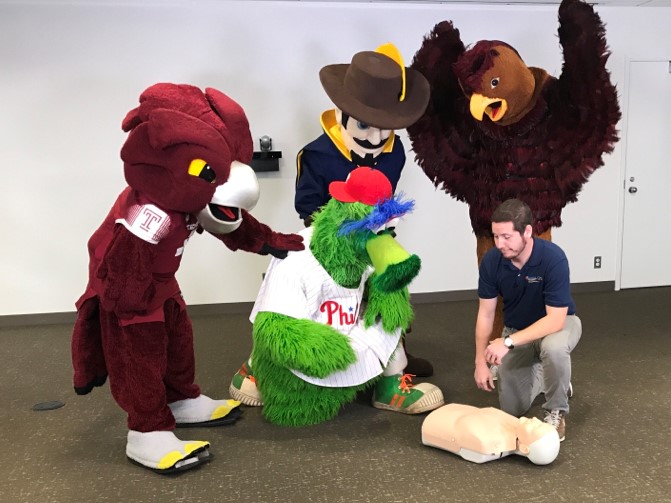 There were plenty of antics and team spirit in the air when several popular sports mascots joined the CPR Ready team at the Independence Blue Cross (Independence) headquarters to learn Hands-only CPR.  However, the Phillie Phanatic, La Salle Explorer, Temple’s Hooter the Owl, and St. Joe’s Hawk quickly got serious to learn this life-saving skill with the help of Nabil Abdulhay, an instructor for Penn’s Mobile CPR unit, which is sponsored by the Independence Blue Cross Foundation and run by experts in the Penn Center for Resuscitation Science. The mascots gathered at Independence to tape a new educational and fun video that highlights the three easy steps to performing Hands-only CPR.

CPR Ready is a campaign launched in June, 2016 that is designed to increase the number of people in the region who are qualified and willing to perform bystander Hands-Only CPR, as well as use an automated external defibrillator.  Independence was one of the initial founders of the campaign, along with several other leading health institutions, such as Penn Medicine, CHOP, the American Heart Association and the American Red Cross.

In Philadelphia more than 1,200 people died from sudden cardiac arrest in 2015. In those cases, the percentage of people who received bystander CPR was 14.3 percent – less than half of the national average, according to the Philadelphia Fire Department Cardiac Arrest Registry to Enhance Survival data.

Here’s what to do if an adult suddenly collapses: