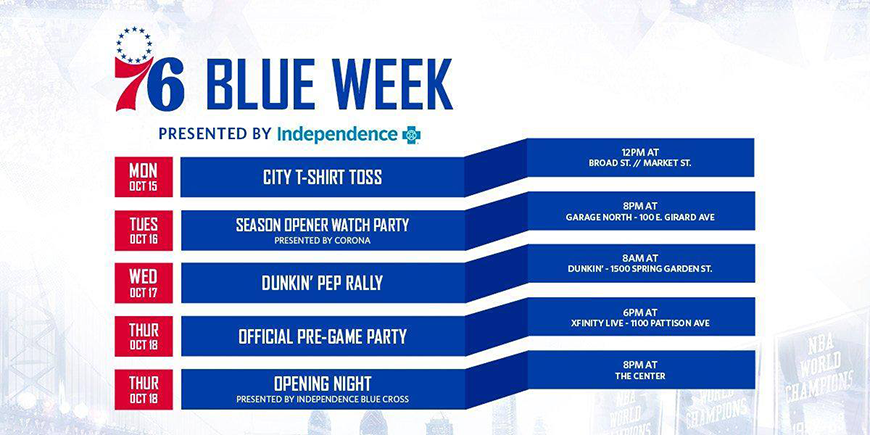 Starting October 11, 76ers and Independence will “paint the town blue”

Co-branded opening night t-shirts to be distributed on October 18 vs. Chicago

“With the help of a great partner in Independence Blue Cross, the 76ers are proud to launch Blue Week ahead of the 2018-19 home opener,” Senior Vice President of Marketing Partnerships Chad Biggs said. “We know that our fans are anticipating a very exciting season, so we encourage them to interact with our brand at all of the fun events we have planned throughout the week.”

“As the region’s leading health insurer for 80 years, Independence is proud to support another iconic ‘Blue’ brand, our hometown Sixers,” said Daniel J. Hilferty, Independence Blue Cross president and CEO. “We know that better health is tied to a greater sense of community, and few things bring us together like cheering for our favorite team. We are looking forward to a great Blue Week and an outstanding Sixers season.”

Starting Thursday, some of the city’s most iconic buildings will display blue lighting or feature 76ers’ marks. Among the included fixtures are the Benjamin Franklin Bridge, Two Liberty Place and The Center. Further, Dunkin’ Donuts is set to offer special 76ers donuts at select locations throughout the city during Blue Week, and SEPTA employees will be seen wearing Blue Week T-shirts to work.

On Monday, October 15, 76ers staff and Sixers ENT can be found on a double decker bus that will be routed from The Center to Market Street, via Broad Street. The entertainment team will be distributing Blue Week T-shirts to fans along the bus route.

The 76ers open the 2018-19 season on Tuesday, October 16 at 8 p.m. against the Celtics in Boston and the team will be hosting a Sixers Season Opener Watch Party, presented by Corona at Garage North (100 E. Girard Ave, Philadelphia, PA 19123). Fans in attendance will have the chance to receive Blue Week T-shirts as Sixers ENT will lead a T-shirt toss at the event.

Blue Week concludes with a pair of parties on Wednesday, October 17 and Thursday, October 18. Thursday, the 76ers will host a pep rally at a local Dunkin’ Donuts (1500 Spring Garden Street, Philadelphia, PA 19130) at which Sixers Dancers, Sixers Dunk Squad presented by Dunkin’ Donuts and Franklin will be handing out free 76ers donuts and Blue Week T-shirts. The next day, in the hours prior to the 76ers’ home opener against the Bulls, Xfinity! Live will host the Official Pre-Game Party. Fans will have the chance to receive Blue Week T-shirts and enjoy Coors Light drink specials.