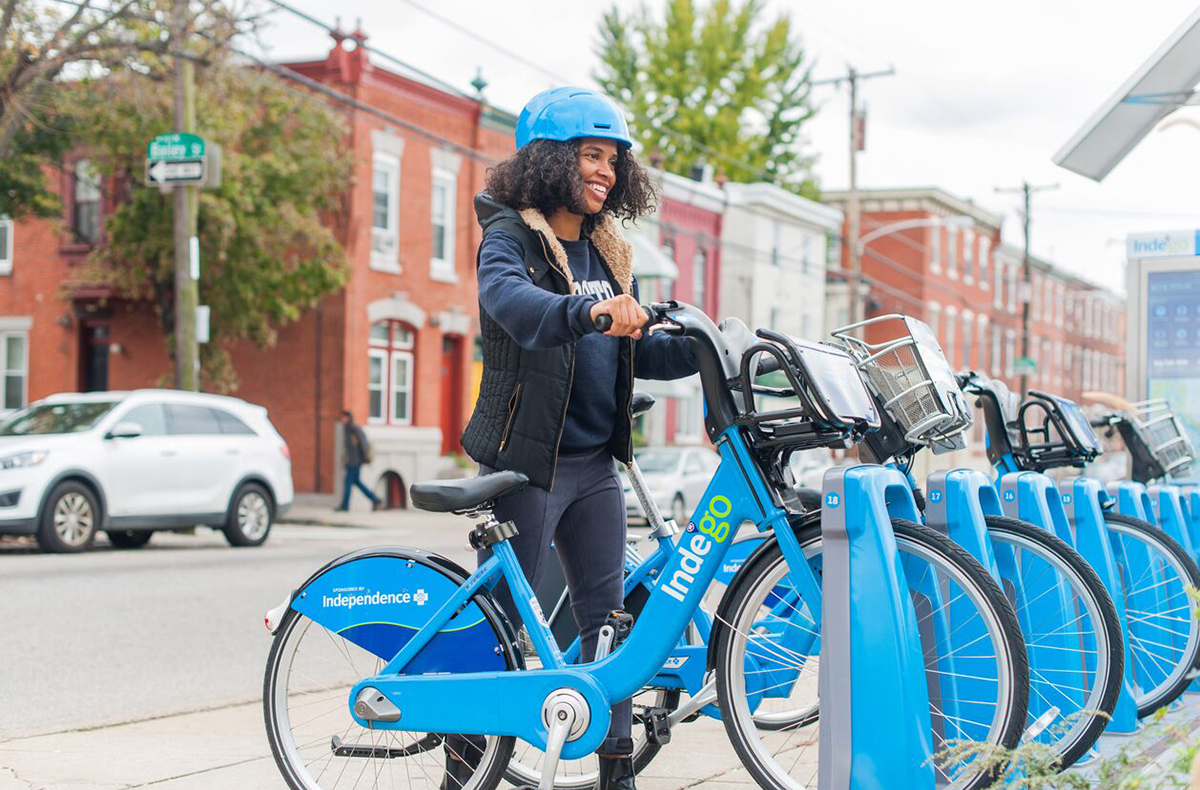 Bicycle Transit Systems, the City of Philadelphia, and Independence Blue Cross (Independence) are excited to announce the renewal of Independence’s title sponsorship of the Indego bike share system through 2030.

“We are proud of Indego’s inclusive approach to station expansion, targeting diverse and historically underserved communities. It is an honor for Independence to renew our title sponsorship of the Indego bike share system. We look forward to Indego’s continued success in advancing an equitable, healthy transportation option for residents and visitors in Philadelphia,” said Gregory E. Deavens, Independence Blue Cross president and CEO.

Independence Blue Cross has been the title sponsor of Indego since its launch in 2015. Since then, Indego and Independence have helped to ensure that residents, commuters, and visitors have access to a healthy, fun, and affordable transportation option. Thanks in part to this sponsorship, Indego has been able to achieve the following:

Over the past seven years, the Indego system has grown from 60 stations and 600 bikes and continues to expand in 2022 to over 180 stations and 1,800+ bikes. Independence’s continued title sponsorship will support the Indego system expansion to more than 3,500 bikes. For more details about this year’s expansion and future system growth, check out the latest Indego blog.

“Creating a transportation system that benefits everyone in our city is a priority of our administration and a high-quality bike network is key towards achieving that goal. I thank Independence Blue Cross for their continued support and partnership to help us expand bike share access to more Philadelphians,” said Philadelphia Mayor Jim Kenney. “By expanding Indego, we can continue to provide new, safe, and sustainable mobility options for all.”

Since the start of the COVID-19 crisis, Indego doubled down on its commitment to accessibility and equity, ensuring service was never interrupted so that frontline workers, health care providers, and residents looking to get their vaccinations had a safe, reliable, and affordable transportation option. Read more reflections from the Indego team in Indego’s 2020–2021 annual report.

“As the operator of Indego, Bike Transit has worked closely with Independence Blue Cross for years. It is no surprise, yet still no less of an incredible investment and inspiration, to see them doubling down on their commitment to making Philadelphia a better and more equitable place to live. And with this sponsorship, Independence has demonstrated their values through a great partnership with Bike Transit, which is a local, women-owned business. We are grateful to have them as a long-time sponsor of bike share in Philadelphia,” said Alison Cohen, Bike Transit and Indego Founder.

ABOUT INDEGO
The City of Philadelphia launched Indego in 2015 as the city’s newest form of public transportation with 60 stations and 600 bikes and expanded in 2022 to over 180 stations and 1,800+ bikes today. Indego offers 24/7 access to the city on your schedule. Indego is an initiative of the City of Philadelphia and sponsored by Independence Blue Cross. Indego is part of the Better Bike Share Partnership, which seeks to develop bike share equitably and sustainably across the country. For more information, visit https://www.rideindego.com/ and follow @RideIndego on Twitter. Those new to bike share are encouraged to check out Indego’s classes and rides programming page.

THE BETTER BIKE SHARE PARTNERSHIP
The Better Bike Share Partnership is an effort led by the City of Philadelphia that works to ensure that Indego bike share is accessible to all Philadelphians. The Bicycle Coalition of Greater Philadelphia is a nonprofit advocacy and education organization working as part of the Better Bike Share Partnership to support bike share and biking education. For more information, visit http://betterbikeshare.org/ and follow @betterbikeshare on Twitter.