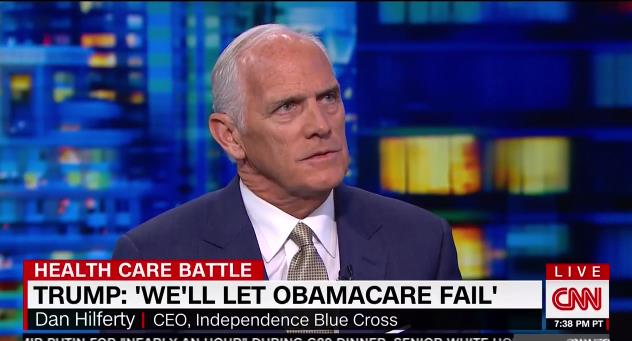 Independence President and CEO Daniel J. Hilferty appeared on CNN to discuss the current state of health care in America

On Tuesday, July 18, Independence President and CEO Daniel J. Hilferty appeared on CNN to discuss the current state of health care in America. During the interview with CNN Tonight host Don Lemon in New York, Hilferty explained that a bipartisan effort is needed to get health care right and stabilize the individual insurance market.

Hilferty said, “We believe health care isn’t Democratic. It’s not Republican. It’s a right for people to have.”

He also described the company’s new contract with the University of Pennsylvania Health System as an example of value-based coverage that can help control costs.

“Let’s look at ways that the private sector, in collaboration with government, can begin to find real savings in the health system,” Hilferty explained.

With the uncertainty surrounding health care reform, the goal of this campaign is to help educate the public about our health care system and underscore what needs to happen to get health care right at this critical juncture.

Along with a series of print, digital, radio, and television ads running in the Philadelphia media market, Independence has also developed an educational website that simplifies the complexities of health care and serves as a go-to resource for people looking for transparency and easy-to-understand information.

Hilferty explains that our legacy must be that we came together, free of politics and ideology, to help the American people get the health care they need.