Independence Health Group, Inc., (Independence) the parent company of Independence Blue Cross, LLC, reported strong financial results for 2017 with total revenue of $16.4 billion and net income of $77 million, or 0.5 percent of total revenue. Over the last five years, the company has increased revenue by 57 percent while consistently committing the overwhelming majority of each premium dollar — 86.4 cents in 2017 — to helping its members achieve and maintain good health.

Independence paid $705 million in federal, state, and local nonpayroll taxes, including $289 million in gross receipts tax, $127 million in state premium taxes, and $2 million in Affordable Care Act-related taxes and fees. Independence did not receive refundable tax credits in 2017 associated with the recently enacted federal tax reform law because the company was not subject to the Corporate Alternative Minimum Tax in prior years.

“In 2017, we continued to grow our business, innovate, and lead meaningful change in this dynamic environment for our members, group clients, and the community — as we have done for 80 years,” said Independence President and CEO Daniel J. Hilferty. “For 2018, we remain committed to empowering our members with customized digital resources and innovative products that enhance their overall experience and promote well-being, while spearheading value-based payment models that change health care dramatically.” 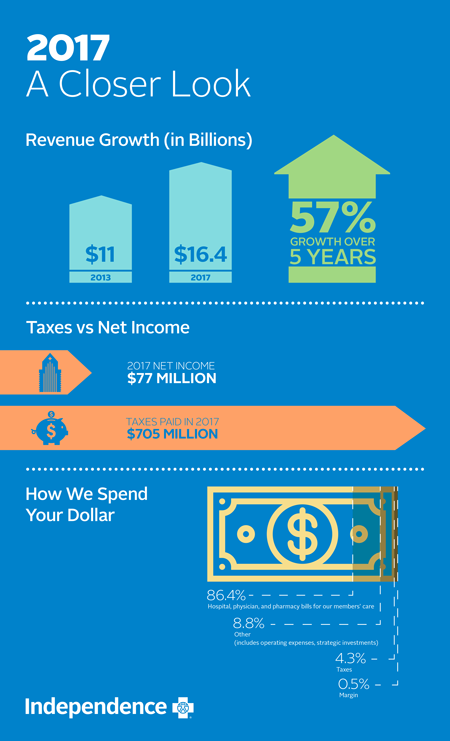 Independence’s performance can be traced to favorable medical cost trends reinforced by the company’s commitment to value-based care, as well as Independence’s strategy of diversification in the Medicaid managed care business. The company also continues to implement actions to improve operational efficiency.

Gregory E. Deavens, Independence executive vice president, chief financial officer, and treasurer, remarked: “Our strong financial performance is the result of a multi-year strategy focused on maintaining financial discipline and effectively managing and mitigating business risk, while improving investment performance and operational efficiency. Our products and businesses are positioned for long-term growth even with regulatory uncertainty, and we continue to look for opportunities to improve overall financial strength.”

Independence continues to develop effective solutions for getting health care right, including:

Through its subsidiaries, Independence closed 2017 doing business in 23 states and the District of Columbia and serving 8.3 million members in all 50 states. In addition, the company employed more than 10,500 people throughout the United States.

The company ended the year with $2.6 billion in surplus, which is in the “efficient” range as defined by the Pennsylvania Insurance Department, and ensures that the company has the resources to pay claims and keep customers secure.