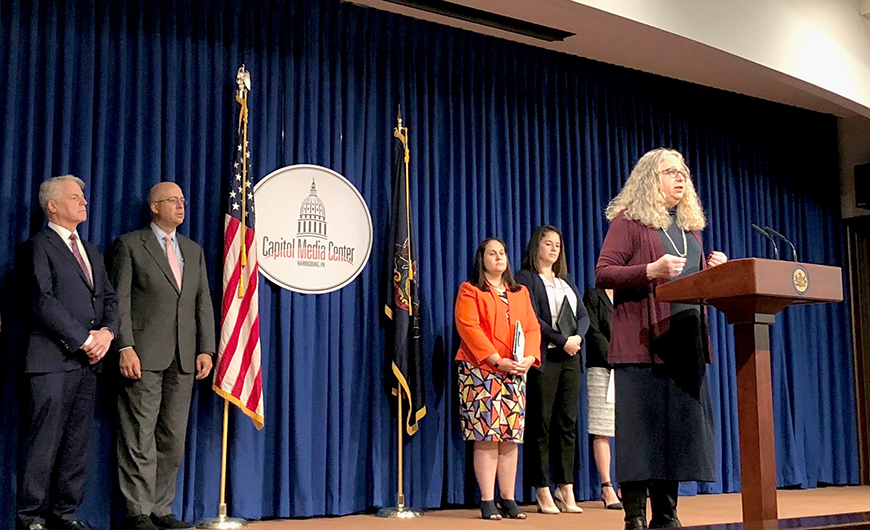 Dr. Richard Snyder, far left in the back, listens as Dr. Rachel Levine, secretary of the Department of Health, speaks during the press conference.

Dr. Richard Snyder, chief medical officer for Independence Blue Cross, participated in a press conference on October 12 in Harrisburg in which state leaders announced an agreement with commercial insurers to align prior-authorization processes for opioid prescriptions to protect patient health and safety. The agreement also ensured that patients have unrestricted access to medication-assisted treatment (MAT) when needed to battle opioid addition.

The agreement closely aligns commercial insurance prior-authorization requirements for opioid prescriptions and access to MAT with those now used by both Medicaid fee-for-service and managed care programs, which were implemented earlier this year by the Department of Human Services. The guidelines apply to individual, small group, and large group fully insured plans.

Independence has worked closely with these state agencies related to the guidelines addressed in the press conference, but the insurer has also been taking steps to fight the opioid abuse crisis for years. Independence was among the first insurers in the country to restrict most initial low-dose opioid prescriptions to no more than five days and removing member cost-sharing for injectable and nasal spray formulations of naloxone and Narcan. Implementing these and other policies has helped Independence to achieve a 35 percent reduction in opioid prescriptions and a 45 percent reduction in members using opioids since 2014.