Independence brings the magic of Santa to the Isaac A. Sheppard School 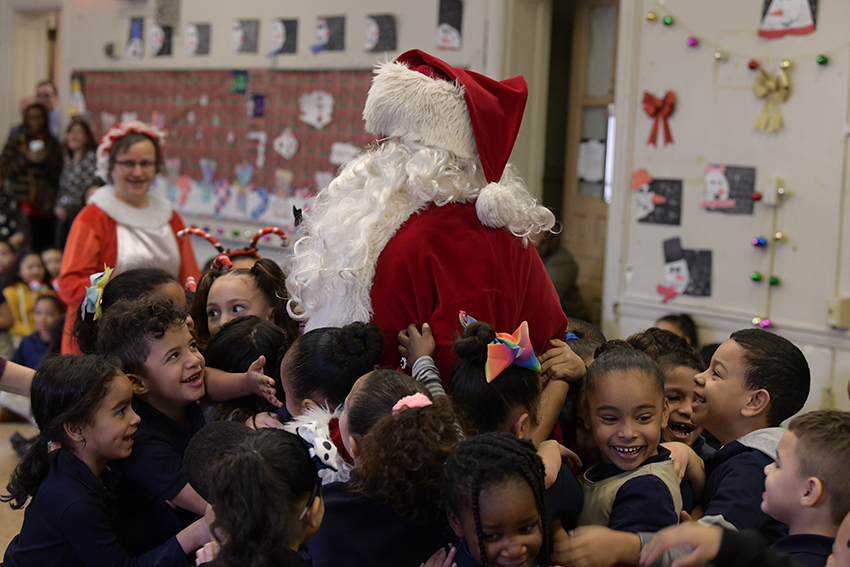 Students at the Isaac A. Sheppard School in West Kensington embrace a very special guest at this morning’s holiday assembly.

Students at the Isaac A. Sheppard School in West Kensington were delighted to welcome a special guest this morning – Santa Claus himself! The holiday tradition is part of a community partnership between the school and Independence Blue Cross that was established decades ago.

Principal Elana Galli welcomed Donna Farrell, VP of Corporate Communications at Independence, to greet the students and express how much the company values its commitment to the school. For years, Independence has provided the Sheppard School with year-round support in the form of sponsorship and volunteerism.

The assembly featured a sing-a-long with the Sounds of Independence, led by Lorina Marshall-Blake, VP of Community Affairs. The gymnatorium erupted in cheers when Santa appeared during “Santa Claus is Coming to Town,” greeting all the students with hugs and high-fives, and playfully stealing their festive headbands and hats.

With the help of Mrs. Claus, Santa handed each student a gift from their wish list. The gifts were donated by Independence associates as part of our annual holiday collection for the students. In addition, Independence made a corporate donation toward the school’s new calm room.