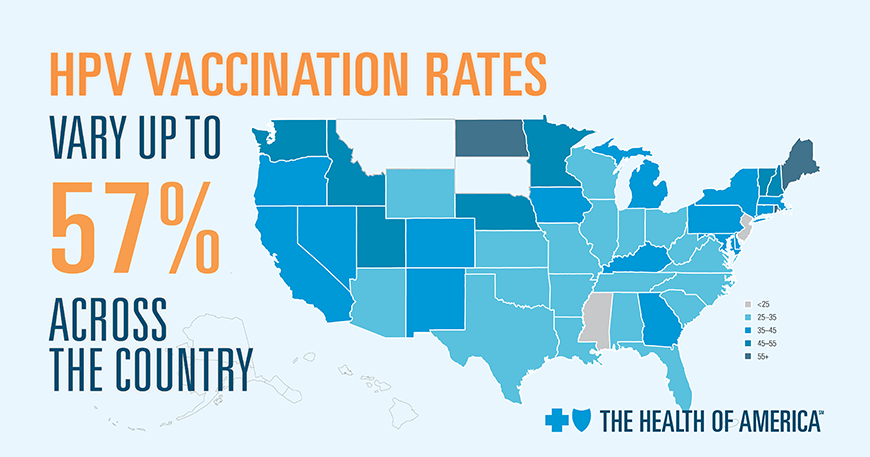 34 percent of the area adolescents received a first dose of HPV vaccine by their 13th birthday, but state HPV vaccination rates still low compared to other adolescent immunizations

Philadelphia, PA — While human papilloma virus (HPV) vaccination rates have risen substantially, just 34 percent of adolescents in the Philadelphia region received a first dose of the vaccine by their 13th birthday, according to a seven-year study of medical claims by the Blue Cross Blue Shield Association (BCBSA). Nationally, 29 percent of Blue Cross and Blue Shield (BCBS) commercially insured adolescent members received an initial dose of the CDC-recommended HPV vaccination from 2010 through 2016.

Despite the growth, HPV vaccination lags behind other adolescent vaccines in the Philadelphia region, where 92 percent of adolescents in 2016 received the meningococcal vaccine, and 92 percent received the Tdap vaccine. Furthermore, 15 percent of are adolescents completed the full three-dose HPV regimen by age 13 in 2016, compared to 9 percent nationally.*

The study also finds that:

The report, “Adolescent Vaccination Rates in America,” represents a comprehensive study of outpatient medical claims for commercially insured BCBS members born from 2000 through 2003 and who were vaccinated by their 13th birthday between 2010 and 2016.**

“While it’s encouraging that more girls and boys are being vaccinated for the HPV virus, there’s so much more we can and should do to raise that rate even higher, considering how effective the vaccine is in preventing cancers,” said Dr. Anna Baldino, a medical director at Independence Blue Cross (Independence) and a board-certified pediatrician. “At Independence, we send reminders to parents/guardians about all vaccinations, including HPV to encourage more children to be vaccinated. There’s also a misconception that boys don’t need the vaccine which is important to dispel. In addition to preventing HPV related cancers, vaccinating males can also provide additional protection for females.” There are about 31,000 cases of HPV-induced cancers each year in the US.

This is the eighteenth study of the Blue Cross Blue Shield: The Health of America Report® series, a collaboration between BCBSA and Blue Health Intelligence, which uses a market-leading claims database to uncover key trends and insights into health care affordability and access to care. Analysis was performed by, and includes, medical claims data from HealthCore, a wholly owned and independently operated health outcomes subsidiary of Anthem, Inc.

* In October 2016, the CDC changed the adolescent HPV vaccination recommendation from three to two doses, starting the vaccine series before the child’s 15th birthday. The report defines a completed regimen as three doses. The second dose of the HPV vaccine should be given six to twelve months after the first dose. It is recommended for teens and young adults who start the series at ages 15 through 26 to complete three doses of the HPV vaccine.

** Study includes continually insured members. All adolescents considered in this study were born between the years 2000 and 2003, and thereby were ages 10 through 12 from the years 2010 through 2016.

About Blue Cross Blue Shield Association
The Blue Cross and Blue Shield Association is a national federation of 36 independent, community-based and locally operated Blue Cross and Blue Shield companies that collectively provide health care coverage for one in three Americans. BCBSA provides health care insights through The Health of America Report series and the national BCBS Health IndexSM. For more information on BCBSA and its member companies, please visit BCBS.com. We also encourage you to connect with us on Facebook, check out our videos on YouTube, follow us on Twitter and check out our blog.