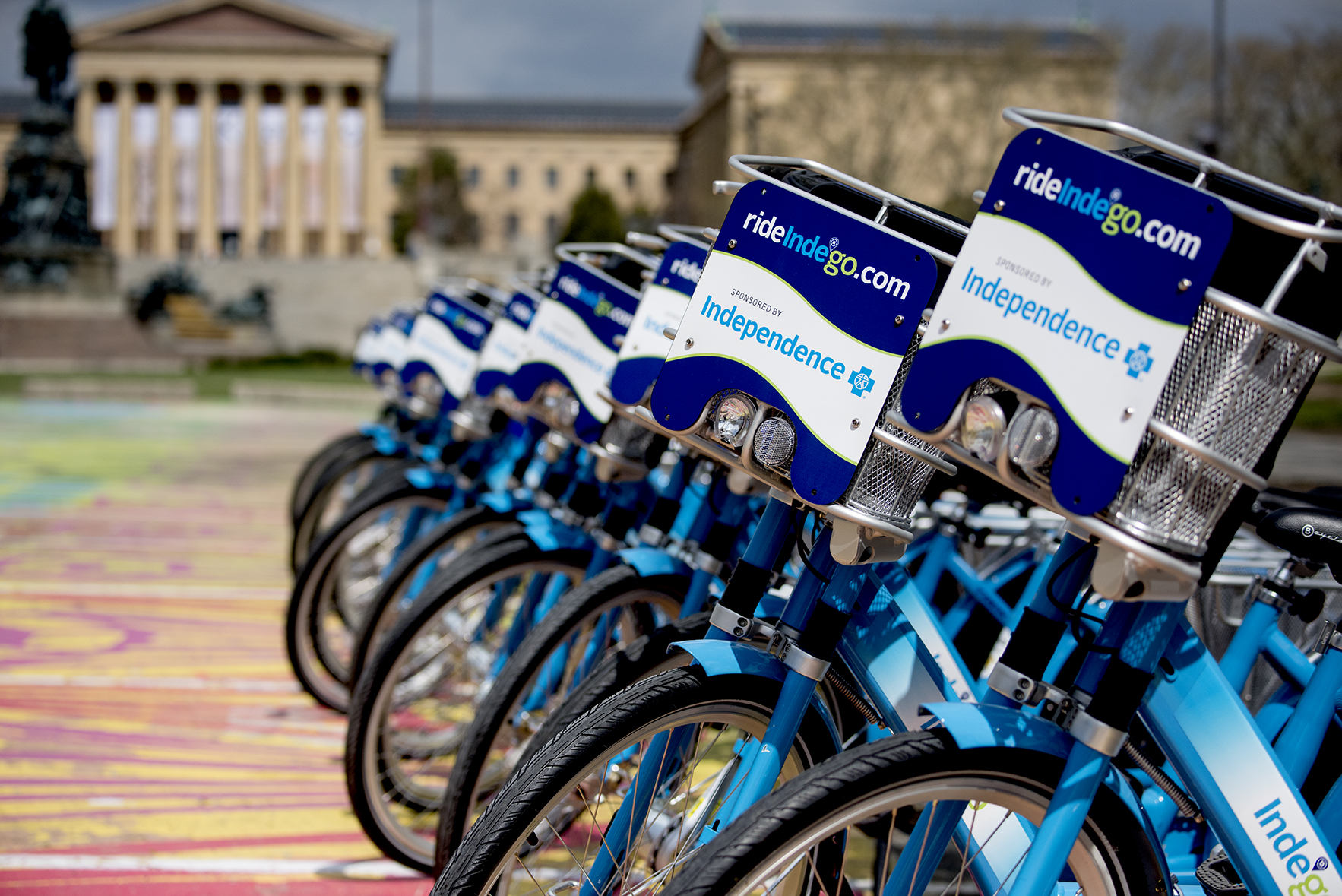 Philadelphia, PA – Mayor Michael A. Nutter and Independence Blue Cross (Independence) President and CEO Daniel J. Hilferty today announced that Independence will be the title sponsor for Philadelphia’s new bike share program, Indego. In addition to the $3 million capital investment from the City and more than $4.5 million in state, federal and foundation funds, Independence will contribute roughly $1.7 million per year for five years. Launching this spring, Indego will provide a new, convenient, affordable, healthy, and fun form of mass transportation.

“Bike share is a must have for thriving cities. The Indego system will provide yet another way for Philadelphians, commuters, and visitors to get around our great city. I am delighted that we have a strong community leader and active partner for this system in Dan Hilferty and Independence Blue Cross. From the first time we spoke about this opportunity, Dan understood the power of offering a new transportation system that provides an affordable, healthy, and convenient option to travel in Philadelphia. This sponsorship puts the system on strong financial footing and poised for growth,” said Mayor Michael A. Nutter.

“Independence’s sponsorship of Indego is a natural extension of our commitment to the health and well-being of the people and communities we serve,” said Daniel J. Hilferty, Independence’s president and CEO. “We’re thrilled to be part of this exciting effort that helps residents and visitors alike experience our world class city through a world class transportation system.”

Today’s announcement includes the unveiling of the Indego logo, which will serve as the icon for a fleet of more than 600 easy to ride and professionally maintained bikes and a network of more than 60 docking stations to be deployed this spring. The bikes and docking stations will provide a new transit system available 24 hours a day, seven days a week that makes it easy to take short trips from station to station. Over time the system is expected to grow to 1,800 bikes and 180 stations. Bike share will serve an area that stretches from the Delaware River into West Philadelphia and from the Navy Yard to North Philadelphia and Temple University’s main campus. Bike share users can access a bike at any station and return it to any other station by using a member card or a credit/debit card.

Detailed pricing will be announced in March, however Philadelphia is proud to announce that Indego will be the first large system in North America to offer:

People interested in learning more about Indego and who want to receive updates on the program, such as membership registration, launch date, and docking station map, can visit Philadelphia’s bike share program website at www.RideIndego.com.

All Indego bikes will be equipped with a bell and both front and rear lights, and each bike will be inscribed with a safety message that encourages helmet use and cautions riders to yield to pedestrians, avoid riding on sidewalks, ride with traffic, and obey all traffic lights and signs.

Philadelphia’s bike share will be operated by Bicycle Transit Systems, a Philadelphia-based business that has assembled the most experienced bike share team in the industry. Philadelphia’s system will benefit from the experience of a team that worked to implement and operate bike share programs in Washington DC, Boston, and Chicago. Bicycle Transit Systems has partnered with Toole Design Group for system planning and Rodriguez Consulting for site planning. Philadelphia’s bike share bikes and stations will be provided by B-cycle. B-cycle grew out of America’s largest bicycle manufacturer, Trek Bicycles, and has more than 4,000 bike share bikes in 30 cities across the U.S. and in Santiago, Chile.

The Mayor’s Office of Transportation and Utilities (MOTU) will continue its extensive community outreach process to educate communities about the program and site specific stations. Since the fall of 2013, staff from MOTU have attended community meetings throughout the proposed bike share service area, presenting to hundreds of Philadelphians about bike share and receiving feedback on program design and station locations. During the fall of 2014, MOTU led a survey initiative to get feedback on proposed station sites. Over five weeks, the City received around 10,000 public comments on 95 potential station locations via an online map, in-person surveys, and text message surveys. Two all-day open houses were held at the Gallery at Jefferson Station and at 30th Street Station in November to discuss the results. Public outreach efforts will continue with additional public demonstrations of the Indego system.

Maps of the bike share station locations chosen as a part of this community input process are being finalized and will be released shortly.

About Independence Blue Cross
Independence Blue Cross is the leading health insurance organization in southeastern Pennsylvania. With our affiliates, we serve 9.6 million people in 25 states and the District of Columbia, including 2.5 million in the region. For more than 75 years, we have been enhancing the health and wellness of the people and communities we serve by delivering innovative and competitively priced health care products and services; pioneering new ways to reward doctors, hospitals, and other health care professionals for coordinated, quality care; and supporting programs and events that promote wellness. To learn more about how we’re changing the game, visit www.ibx.com. Connect with us on Facebook at ibx.com/facebook and on Twitter at @ibx. Independence Blue Cross is an independent licensee of the Blue Cross and Blue Shield Association.