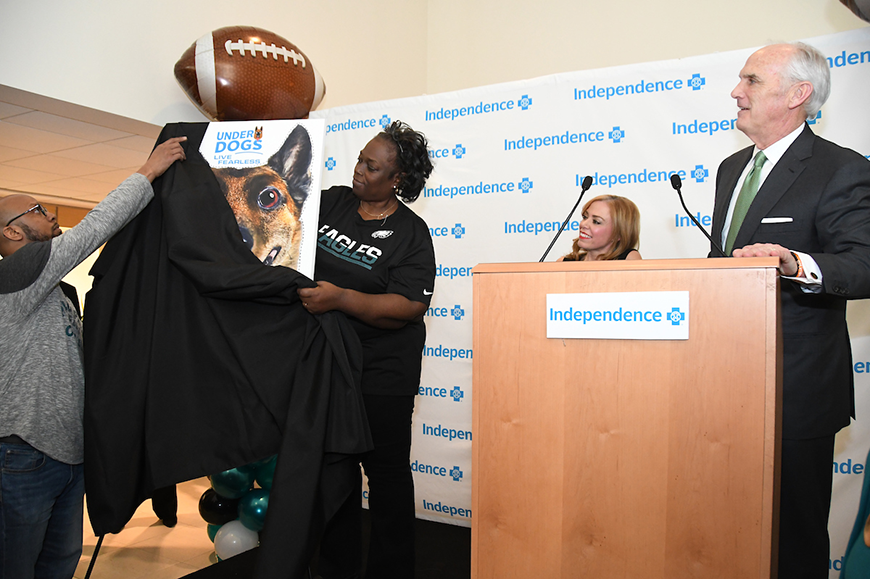 Philadelphia, PA — Independence Blue Cross (Independence), in celebration of the NFC Champion Philadelphia Eagles (Eagles), will sponsor dog mask cutouts for fans to cheer on the team during the Big Game on Sunday, February 4 in Minneapolis, Minnesota. Dog masks, symbolizing the Eagles’ status as “underdogs,” have been popular and hard to get since the Eagles’ Divisional Round Playoff win on January 13. To ensure that fans have access to this important new symbol of Eagles pride, Independence is making the cutouts widely available, including as an insert into the Friday, February 2 print edition of The Philadelphia Inquirer.

“The spirit and character of an underdog resonates in Philadelphia, unlike in any other city,” said Daniel J. Hilferty, president and CEO at Independence. “Underdogs live fearless — and play fearless too. As part of the fabric this community, Independence respects and values the grit, persistence and all-out faith that our Philadelphia Eagles have shown this season. Knowing what this moment means to generations of fans – and generations of our members — in the region, we are proud to help make the fan experience everything it can be.”

Hilferty also announced that Independence will donate to The Fund for the School District of Philadelphia in support of the fundraising campaign started by Eagles’ offensive tackle Lane Johnson and defensive end Chris Long. Their debut of the dog mask and vocal embrace of the team’s “underdog” status led to this region-wide sensation. Johnson and Long have subsequently leveraged this enthusiasm for philanthropic support of The Fund through the sale of two specialty t-shirts.

Lane Johnson expressed his gratitude to fans and Independence, saying, “It is awesome to see everyone in Eagles Nation — from our incredible fans to important companies in the region — coming together to support our cause and our team. This is what Philly is all about — helping each other and improving this City for local kids.”

Also sharing in the excitement of the announcement was former Head Coach of the Philadelphia Eagles and Independence Ambassador, Dick Vermeil.  Reflecting on his own experiences, especially in taking the Eagles to the Championship Game in 1980, Vermeil said, “Philadelphia Eagles fans are as smart and committed a fan base as you will find. Their passion is something that made my time as head coach so memorable. The fact that the team and the city have united together as “underdogs” just shows how special that bond is. I’m delighted that Independence has stepped forward to ensure that the best fans in the league are ready for the Big Game and it makes me proud to see players like Lane Johnson and Chris Long step up in such an important way.”

On behalf of all the employees at Independence, we join with the region in saying, “Fly, Eagles, Fly!”