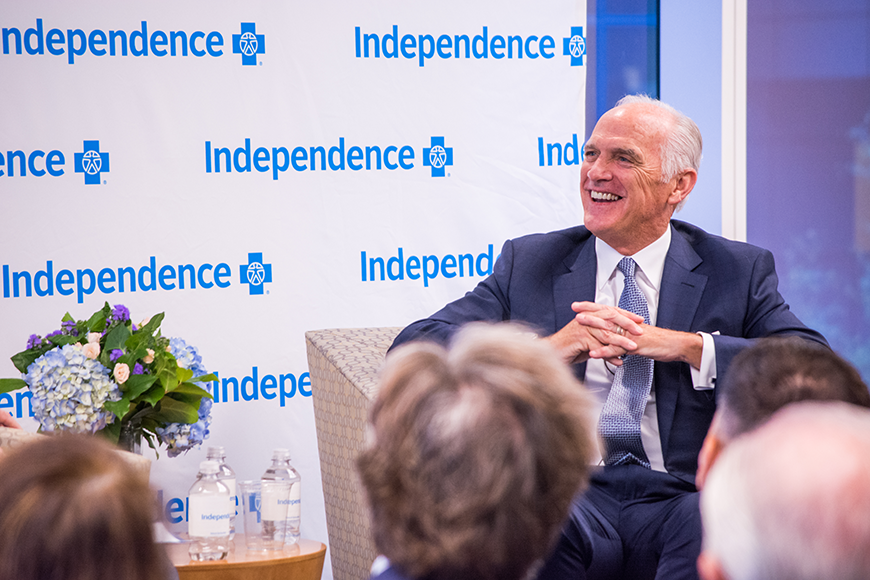 Independence CEO Dan Hilferty shares his story on the latest Growing Greater Philadelphia podcast, recorded in front of an audience at Independence LIVE.

In a recent interview with Dan Hilferty, Growing Greater Philadelphia host Matthew Cabrey questioned whether people look at the CEO of Independence Blue Cross and think of him as a “health care executive.”

“You’re really innovating, and you’re inspiring your team to think differently and be empowered to come up with solutions that maybe 15 years ago, wasn’t the mindset of a corporate health insurer,” explains Cabrey, executive director of Select Greater Philadelphia and senior vice president for the Chamber of Commerce for Greater Philadelphia.

During the conversation in front of an audience at Independence LIVE, Hilferty reflects on the moments in his life that inspired and shaped his career, provides insight on effective leadership, and talks about the “buzz” in Philadelphia that’s beginning to draw more people and businesses to the city.

Hilferty also tells the story of Independence and how it’s evolved to serve more than 8 million people nationwide. A key aspect of that evolution is the commitment to reimagining how health care is delivered and how an insurance company can drive transformation through innovative partnerships — like the joint venture with Comcast and a results-driven collaboration with Penn Medicine — and community engagement.

“It’s part of our mission to focus every day on the individual, the family, the community — to help people navigate the health system and help people get well and stay well wherever possible,” Hilferty said. Part of that commitment, he continued, is teaming up with community events and organizations whose missions are aligned with Independence’s.

Visit Radio.com to listen to the episode, which aired on Talk Radio 1210 WPHT. The series is also available on Apple Podcasts.